He was the son of a colliery owner and farmer in Bradford, West Yorkshire. In 1819 he married Ruth Briggs, daughter of a landowner from Queensbury, on the outskirts of Bradford.

He set up in business the same year in a warehouse in Queensbury on what would later be the site of the Black Dyke Mills. Initially he would buy yarn and distribute it to handloom weavers who would sell back the finished cloth. By 1827 he was successful enough to build Prospect House as a family home.

In 1828 he rented Cannon Mill for wool spinning, prior to erecting the first part of Black Dyke Mills in 1835 on land acquired from his father-in-law. By 1851 Black Dyke Mills was dominating the Queensbury landscape and at the Great Exhibition of that year he was awarded first prize for alpaca and mohair fabrics and the gold medal for yarns. 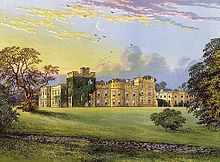 In the 1870s he bought and renovated Hornby Castle, Lancashire to which he retired. On his death in 1879 he was succeeded by his son William, who had been made a full partner in the business of John Foster & Son since 1842. The company is still a leading manufacturer of worsted and mohair fabric.

Colonel William Henry Foster (1848 – 27 March 1908) was a British businessman and Conservative Party politician, who owned the Black Dyke Mills in West Yorkshire and lived in Hornby Castle in Lancashire. He sat in the House of Commons from 1895 to 1900. Foster was the son of William Foster, of Hornby Castle, Lancashire and of Queensbury near Bradford in West Yorkshire He was educated in Liverpool and abroad, and entered the family's textile business, becoming a director in 1842 of John Foster and Son Ltd in Queensbury, and other businesses. The family's Black Dyke Mills, which dominated the village of Queensbury, became one of the world's largest makers of worsted cloth. The firm had been founded by his grandfather John (1798–1879), who had retired to Hornby Castle and passed the company to his son William (1821–1884). Foster was appointed as High Sheriff of Lancashire in June 1891, after the death of George Preston, and in September 1892 he became a Deputy Lieutenant of the West Riding of Yorkshire He served in the militia as the Lieutenant-Colonel of the 2nd West Yorkshire Yeomanry Cavalry until his retirement in 1892, with the honorary rank of Colonel.

The Black Dyke Band Heritage Project has been supported by a grant from the Heritage Lottery Fund. Thanks to National Lottery players, we have been able to develop this website, catalogue and enhance our museum displays and engage with the local community.

How to find us

All content on this site copyright Black Dyke Band 2017